I can wax rhapsodic on the awesomeness of Rarity (from My Little Pony: Friendship is Magic). Her story arcs are full of nuance, personal challenge, and emotional maturity. Rarity finds sacrifice and generosity to be difficult, which is why it is such a victory every time she strives to be her better self. She represents the pony heart in conflict with itself. I adore Rarity for her flawed ponyanity and the constant tension between her desire to be the Pony Everypony Should Know and her role as the generous heart in the Elements of Harmony.

I love Rarity for her character challenges. But I identify with Rarity because of this:

“Dressmaking’s easy.” HAHAHAHAHAHAHAH. Rarity and I know the truth! However, when it comes out right and you have a finished product, it’s one of the more satisfying feelings in this world. It’s akin to finishing and publishing a story, except that not as many people know how to sew, so not as many people are going to pick apart your flaws. They look at the thing you did and go: “That’s amazing. I could never do that!” (nobody EVER says this about writing!)

And you strut around for days feeling like a superhero.

So today I’m feeling like a purple-haired superhero unicorn dreamstress. I finished Beth’s coat and put it in the mail. Barring postal disaster, she’ll get it before her book release on September 16!

Here are some pictures of the final process. I had one sleeve mishap where I finished the entire sleeve only to realize that the lining was twisted around so that it didn’t line up with the interfacing and brocade. I had to dismantle the whole thing and redo it. Still, that was barely a hiccup and not worth even one thrown bobbin. 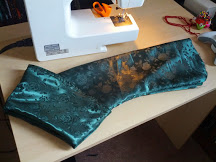 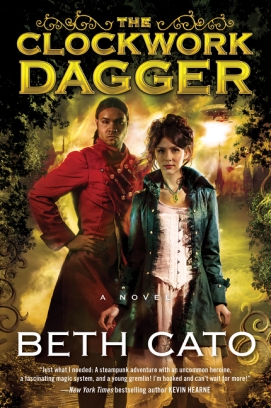 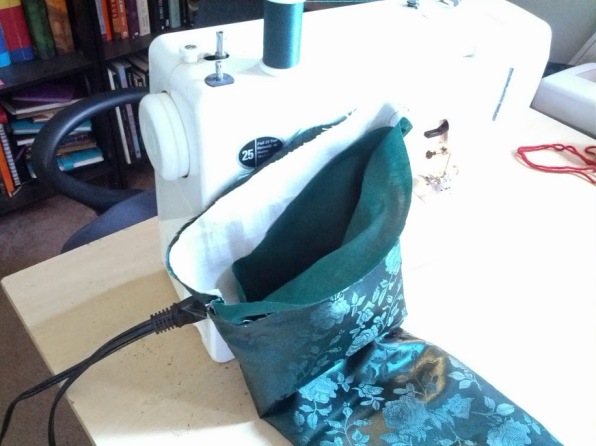 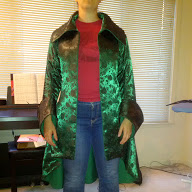 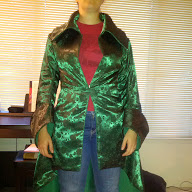 I couldn’t find good lace to match the lace on the cover picture, so Beth and I agreed to ditch the lace (I think it looks better without it, anyways). I found shiny gold buttons that matched pretty well, but they looked too modern and cartoony, so I went with some lovely filigreed bronzy buttons. Much better!

I could not have done this without the support and living room floor of Marie Brennan. Marie was even kind enough to do some modeling of the final product using her much-nicer-than-mine camera (she also did some basic photo editing). We tried a boobs-and-butt shot in honor of Jim Hines, but it came out blurry because even trained dancers and almost-black-belts in karate (like Marie) find it hard to hold boob-and-butt poses for long.

So! Mission accomplished! I’ll post pics of Beth in her coat once she receives it.

In the meantime, I should probably get back to writing my own stuff. These characters aren’t going to torture themselves!

1 thought on “Rarity is my patronus”