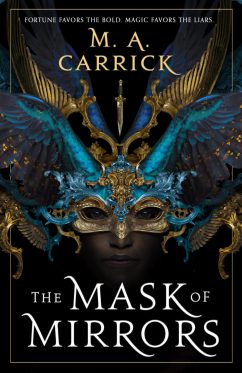 The Mask of Mirrors (with Marie Brennan, as M.A. Carrick)

“Utterly captivating. Carrick spins an exciting web of mystery, magic, and political treachery in a richly drawn and innovative world.” — S. A. Chakraborty, author of The City of Brass
The Mask of Mirrors is the unmissable start to the Rook & Rose trilogy, a darkly magical fantasy adventure in which a con artist returns to the city that betrayed her, determined to have her revenge–only to find that her fate might be to save it.
This is your past, the good and the ill of it, and that which is neither…
Arenza Lenskaya is a liar and a thief, a pattern-reader and a daughter of no clan. Raised in the slums of Nadezra, she fled that world to save her sister.
This is your present, the good and the ill of it, and that which is neither…
Renata Viraudax is a con artist recently arrived in Nadezra. She has one goal: to trick her way into a noble house and secure her fortune.
This is your future, the good and the ill of it, and that which is neither…
As corrupt nightmare magic begins to weave its way through the city of dreams, the poisonous feuds of its aristocrats and the shadowy dangers of its impoverished underbelly become tangled — with Ren at their heart. And if she cannot sort the truth from the lies, it will mean the destruction of all her worlds.
“A tightly laced plot dripping with political intrigue. Carrick has built a strong foundation for things to come.” — Publishers Weekly

The Mask of Mirrors, coming in January 2021!
Available in print, ebook, and audibook

The Dragons of Heaven

Missy Masters inherited more than the usual genetic cocktail from her estranged grandfather. She also got his preternatural control of shadows and his enduring legacy as the legendary vigilante superhero, Mr Mystic. After a little work the costume fits OK, but Missy is far from experienced at fighting crime, so she journeys to China to seek the aid of Lung Huang, the ancient master who once guided her grandfather. She becomes embroiled in the politics of Lung Huang and his siblings, the allegedly mythical nine dragon-guardians of all creation. When Lung Di – Lung Huang’s brother and mortal enemy – raises a magical barrier that cuts off China from the rest of the world, it falls to the new Mr Mystic to prove herself by taking down the barrier. It’s a superhero novel, a pulp fantasy novel, with lashings of kung fu, immense kick-ass dragons and an unfailingly sympathetic heroine – yes, it’s another wonderful Angry Robot title.

The Conclave of Shadow

The line between enemy and ally is thinner than a shadow’s edge.

Ever since she saved the spirit guardians of China by selling out to her worst enemy, Missy Masters — a.k.a. the pulp hero Mr. Mystic — has been laying low. But when knights serving the Conclave of Shadow steal secret technology from a museum exhibit on the Argent Aces, everyone looks to Mr. Mystic for help. If Missy doesn’t want her masquerade blown, she’d better track down the thieves, and fast.

But stolen tech turns out to be the least of her problems. Recent events have upset the balance of power in the Shadow Realms, removing the barriers that once held the ravenous Voidlands in check. Their spread threatens destruction in the mortal realm as well… and only the Conclave stands ready to push them back.

In a world of shadow, telling friends from enemies is easier said than done. But if she wants to save San Francisco, Missy will have to decide who to trust. Including her own instincts, which tell her that something is stalking her with murder in mind…

Chiaroscuro: Italianate epic fantasy full of politics and poisoners, courtiers and courtesans, rapiers and repartee. Revising to send to editors.

Once, the port of Benechiaro was a city of light, a bastion of learning, and an opportunity for the daring to make their fortunes, but the Grande Courtesan of the sea has aged past her prime, and now politics and privilege rule the day. A young nobleman-in-exile stumbles into this viper’s nest when he discovers a plot to pillage the city, but do the pirates act alone, or is the attack part of a larger conspiracy involving the city’s own aristocracy? I blog about it in detail here.

“A Screech of Gulls,” in Beneath Ceaseless Skies #168, is a short story about loss, memory, and small heroisms set in this world.