The Clarion Workshops (Clarion in San Diego and Clarion West in Seattle) are by-audition workshops for writers of speculative fiction (SF/Fantasy/Horror). For six weeks during the summer, eighteen writers come together under the instruction of six seasoned masters of genre. The students churn out one story and seventeen critiques a week. It’s an intense experience, the sort that can break people down and break them through to becoming better writers. The intensity of the shared experience can help build lasting bonds between classmates that are as much family as friendship.

It isn’t the right experience for everyone. Some individuals shut down under that kind of pressure. Some classes run into interpersonal conflicts that muddy the potential for bonding. Some people can’t afford to go in terms of time or money. But for me (and for my seventeen littermates in the class of Clarion West 2012), it was a life-changing experience in the best possible way.

This week, the classes of Clarion and Clarion West 2016 are starting on an amazing journey. It’s a time when Clarion alums get nostalgic, and I’m no exception! For the next six weeks, I’ll be checking in with my cohort from CW2012 and asking them to talk about their CW experiences: where they were as writers before the workshop, how the workshop impacted their writing, what they’re working on now, etc.

Like dandelion seeds, we’ve dispersed along different courses, some of us hitting ‘measurable’ success markers earlier than others. For better or worse, that’s how this writing thing works. But that’s not the full measure of our potential. One of my classmates in her interview quotes our Week 4 instructor, Connie Willis: “Writing is not a career, it’s a holy vocation. You put in as much time as it takes.” Our vocation is subject to the whims of chance and opportunity. It’s never easy, it’s never over, and it’s different for every person.

Today we have Indra Das, whose first novel, The Devourers, is being released in North America today!

What was your writing and publishing experience coming into Clarion West 2012?

I’d been writing fiction since I was a child. I was always twisting our boring, generic class creative writing topics into something that would interest me. I wrote a tiny remake of Jurassic Park once—about scientists in a forest valley in China discovering and being eaten by surviving raptors, and remember my teacher telling me that “gout” was not a word that could be used to describe blood coming out of a wound (I learned that it could, in fact, from Crichton’s Jurassic Park and many a Stephen King novel).

I ramble. I started actual writing at seventeen, when I started writing my first epic fantasy novel, The Shattering Sigil. I even self-published that novel, thinking the vanity press was a small publisher that was looking out for new writers, and that was a harsh and useful lesson. Anyway, I haven’t stopped since that ambitious bid at being India’s J.R.R. Tolkien. Well, for bits of time when I can’t write, but it’s my career now, more or less.

What sort of expectations did you have for the workshop?

I didn’t really know what to expect. I just thought that it’d be a great place to write for six weeks, meet some writers I admired, and just build up my work and work ethic. I had no idea, or expectation of, how intense it would be, or how close I’d get to my classmates.

What was something indispensable or revelatory that you learned from an instructor or special guest? From one of your classmates?

I don’t know that I learned anything that can be condensed into one line, but witnessing my classmates’ work ethic is never not galvanizing when I really need to shake myself out of the creative doldrums. They’re a constant reminder that you can write your way out of the deepest slumps (most of the time).

How was the workshop meaningful for you? How has it impacted your writing?

The workshop changed my life by giving me an additional little family of seventeen writers who are essentially like siblings at this point. It gave me six weeks of glorious flashbulb memories—it was like an eventful, key phase of one’s life, say college, compressed into six weeks of revelry and work. It made me feel like part of a larger community of writers and editors and publishers. I got to meet so many of the people I’d previously only read and ‘met’ online, and see that many of them are lovely and supportive (which is important when the internet gives voice to everything shitty and insular about the notion of ‘community’ too). It very assuredly showed me that I could finish writing a complete short story draft in the space of one night, which honestly does wonders for your confidence.

I don’t know that it’s affected my writing in any way that can easily be delineated, but it’s always valuable to receive and give critique, and that changes your writing in subtle ways. Ultimately, what Clarion West did was give me a massive, euphoric, supercharged dose of creative inspiration from being immersed in an environment which was all art, all the time (there’s a hard comedown afterwards too, but you level out).

What’s something you’ve accomplished since the workshop that you’re really proud of (doesn’t have to be writing related!)

I found an agent and achieved my first novel publication, which are both things I’d been striving for ever since I started writing.

What are you working on now?

I tend to work on various things and see what they coalesce into. Short stories. But my second book is a priority; I just don’t know which of my various ideas and attempts will turn into the final novel.

Pick one and answer: What do you say when people ask, “Where do you get your ideas from?” Do you have an unusual talent or skill? What keeps you awake at night? If you weren’t a writer what would you be? What are you going to do right now when you’ve finished this ordeal?

What do you say when people ask, “Where do you get your ideas from?”

I tend to get a lot of ideas from my dreams. In the case of my first published novel (The Devourers), it all started with a stoned reverie at a small music festival in Calcutta, but actual dreams are a vital resource for me. I’m always disappointed when I wake up and can’t remember any dreams from the previous night. When I do, it’s like finding a fabulous present under your pillow.

What question do you wish I’d asked? Answer it!

What was the worst part of Clarion West, for you?

The constant state of sleep-deprivation (though that has its positives too). The goodbyes. 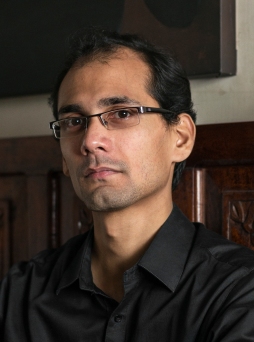 Indrapramit Das (aka Indra Das) is a writer from Kolkata, India. His debut novel The Devourers (Penguin Books India) was shortlisted for the 2016 Crawford Award, and is slated for a July 2016 release in North America from Del Rey. His short fiction has appeared in a variety of publications and anthologies, including Clarkesworld, Tor.com, Asimov’s, and The Year’s Best Science Fiction. He is a 2012 Octavia E. Butler Scholar and a grateful graduate of the Clarion West Writers Workshop. He can be found online at www.indradas.com.

You can sponsor Indra in the Clarion West 2016 Writeathon here.